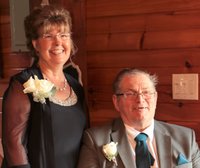 Stephen E. Bodnar of Quaker Springs was called home by his Lord and Savior Jesus Christ on Wednesday, August 21, 2019 following a brief illness.

He was born October 16, 1944 to the late Stephen and Ruth Fitch Bodnar in Saratoga Springs, NY.

Steve was a 1962 graduate of Schuylerville Central School and went on to work at the family farm.  He also worked on area farms learning from them what he called an education from Quaker Springs Ag and Tech.  He also worked part time for Schuyler Feed Store, Schuyler Prep School and as a salesman for Stark Brothers Nursery.  He enjoyed gardening and for years sold vegetables at area stores.  He loved working on his John Deere tractor where he could talk with the Lord all of the time.

On June 27, 1970 he married the love of his life, Joann Carden and together they had five beautiful children who they raised on the family farm.  Besides his love for his family, farm, and faith, he loved his fire department family and community.  Along with 50+ years in the Quaker Springs Fire Dept. where he held many positions including chief, fire commissioner, trustee and chaplain, he served as a member of the Town of Saratoga Zoning Board of Appeals since 1981, for many years serving as chairman.  He was a former 4-H leader, youth center basketball coach and first manager of Quaker Springs baseball team.  He and his wife were members of various bowling leagues.  He was a member of Agrimark Milk Cooperative, was a communicant of Notre Dame-Visitation Church in Schuylerville where he was a church school teacher, communion minister, greeter, trustee, parish council member, called to be church group member, and headed the Bereavement group.  He was also a third-degree member of Schuylerville Kof C Council #1735.  He enjoyed helping people and made hundreds of calls to people who needed a call to let them know someone cared, and would ask you to call someone today and let them know you care.

A funeral mass will be celebrated at 10am Monday, August 26, 2019 at Notre Dame-Visitation Church.  Burial will follow in Notre Dame Cemetery.

Memorials can be made in Steve’s memory to Notre Dame-Visitation Faith Formation or Capital Campaign at the church.