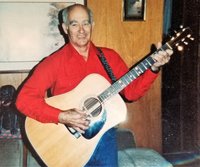 Singer and songwriter Alvah “Al” Leslie Porter, 90 a resident of Jackson, NY went to be with his lord and savior Jesus Christ on Sunday, February 23, 2020 at his residence surrounded by his longtime caregiver Connie G., as well as Colleen M. and Melissa G. He was born April 22, 1929 in Greenwich, NY and lived there until 1951, later moving to Jackson where he resided for the past 42 years. He worked for the Stevens & Thompson Papermill for over 40 years retiring as a foreman. He liked hunting, fishing, and building things of wood and metal, and he liked to tinker with autos and engines. Some would say he was a jack of all trades and master of none. Al loved to play the guitar and sang both country and gospel music. Throughout his life he has recorded hundreds of different songs which gave him great joy. He enjoyed riding his motorcycle and traveling and was a proud member of the N.R.A and A.M.A. He is survived by his brother William Porter of North Carolina; sister Dorothy Warwick of Gloversville; two grandsons Jeremy Waters and Nicholas Porter, as well as several nieces and nephews; special friends Margaret C., Lillian and Avery B. In addition to his parents he was predeceased by his son Nicholas Porter; 2 daughters Kathleen Waters and Debra Seel; sisters June Gray and Alice Sweet; brothers Charles and Roger Porter. He would like to thank Connie G. for helping him remain in his home for the last five years of his life. He also wants to thank his neighbor Howard W. for being there whenever he needed him. Many thanks to the girls, Colleen M. and Melissa G. who helped him come home to live out his remaining days. Also, a special thank you to Saratoga Hospice for their outstanding support and care. A funeral service will be held at 5pm on Friday, February 28, 2020 at the Flynn Bros. Inc. Funeral Home, 80 Main St, Greenwich, NY, 12834 with Celebrant Jason M. Easton officiating. Family and friends may call from 4-5pm prior to the service. Spring burial will take place in the Greenwich Cemetery. In lieu of flowers donation’s in Alvah’s memory may be made to the Salem Rescue Squad, 152 E. Broadway, Salem, NY, 12865. Online condolences and messages to the family may be made at www.flynnbrosinc.com