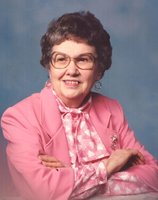 Edythe DeGrechie Burch passed away on July 7, 2020 comfortably at the home of her daughter, Gail Blake with whom she had resided for the last 3 ½ years, with her family at her side. She was born March 31, 1916 in Alburg, VT to Emile and Edith (Ruff) DeGrechie. She lived in Schuylerville all her life. She graduated from Schuylerville High School in 1934 and married Lester Burch in 1939. Edythe led a very busy life. Growing up through the depression, she knew if she needed spending money, she would have to earn it. At a very early age, she ran errands for neighbors, raked leaves and was reliable enough to babysit. Her first steady job was while she was still in elementary school. A neighbor whose husband was a traveling salesman, paid her twenty-five cents a week to post a letter daily to him. She also worked for a barber and his wife who operated a beauty salon cleaning their house and ironing his white shirts and her cotton uniforms. Later, she ushered evenings at the local movie theater and also babysat and did house cleaning for the owner. On weekends she house-cleaned for relatives. During WWII, she worked in the Glove Shop days and at the theater nights. After her daughter was born and her husband was serving overseas, she was a stay-at-home mom, but kept busy as a Post Star Correspondent. She also spotted planes for the US Air Force for which she earned her “Wings” and received a Citation from Governor Harriman. She was the first employee to work for the Schuyler Farms Dairy Bar when they opened in June 1955. After nine years, she left there and worked for General Foods in Saratoga Springs for 16 years, retiring in 1979. During her lifetime, she belonged to several organizations, Junior and Senior CDA, Home Bureau, Old Saratoga Historical Society, American Legion Auxiliary, Notre Dame-Visitation Rosary Society, and was a Charter Member of the Schuyler Hose Co. Auxiliary. She also belonged to the Quaker Springs and Old Saratoga Senior Citizens. She was a member of pinoccle and canasta card clubs. Her hobbies were gardening, doing needlework and puzzles, watching the birds in her yard, and she was an avid reader. She enjoyed giving, and for over 60 years, she made May Baskets for family, friends and neighbors. She started a family tradition of making and giving away homemade goodies at Christmas. Her daughter Gail, and granddaughter Heather, are following her tradition. Edythe was predeceased by her parents; her husband Lester in 1981; 1 brother Anthony; and sisters, Mary Pendrak Carr and Rita Mosher; son-in-law, Daniel Blake; grandson, Dennis Hall; and great-great granddaughter, Jade Devon Hall. She is survived by her loving family, daughters, Gail Blake and Mona (Dave) Hall; grandchildren, Fr. David Blake OFM, Terry (Sabrina) Blake, Heather (John) Steele; Terry (Danny)Brown, and Trisha Orologio; great grandchildren, Kevin (Aerielle) Jasper, Joshua (Katie) Blake, Cady-lin Blake, Chelsea Blake, Lucas Steele, Logan Steele, Leana Hall, Kristen Brown, Tanya Brown, and Lindsey Orologio; step-great grandchildren, Sue Lynn Brown, Amanda (Adam) Cooper, and Samantha (Josh) Reome; great-great grandchildren, Chloe Jasper, Braden Blake, Cole Blake, Alexandria Stuart and Hunter Blake; step great-great grandchildren, Hayden Cooper, Bryan Cooper, JLynn Brown, Jayson St. John, Taylor Reome and Chelsea Reome; several nieces, nephews, and cousins. A funeral service will be held at 10am Friday, July 10, 2020 at Notre Dame-Visitation Church with her grandson, Father David Blake OFM, officiating. Burial will follow in Notre Dame Cemetery. Friends may call on Thursday from 5-7pm at Flynn Bros. Inc. Funeral Home, 13 Gates Ave., Schuylerville. Masks and social distancing will be required along with limiting the number of people in the funeral home to 25 at a time. Memorials can be made in Edythe’s memory to the Schuyler Hose Co., General Schuyler Emergency Squad, Notre Dame-Visitation Church, or the charity of your choice. The family wishes to thank Schuylerville Family Health, Dr. Nielson and staff for all their guidance, support and professional care they have provided the past 3 ½ years. Many thanks to both the Kindred At Home and Albany VNA for their nurses who ar so kind and caring as well as knowledgeable. Special thanks to her caregivers, Jamie Donovan, granddaughter Heather Steele, and great granddaughter Katie Blake, as well as others who helped with her care. Father Martin Fisher and the Notre Dame-Visitation Pastoral Care members who administered Sacraments and other church rites.