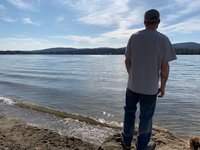 James R. Rouse, 34, a resident of Averill Park passed away unexpectedly as a result of a long illness on Thursday, August 13, 2020 at his home. He was born in Dallas, TX to Richard Rouse and Tammy Curtis Gaughan. The most important people in James life were his family, he was a great dad to his two children. He would lend a hand to anybody who needed help and would be the first person to suit up and show up. James was well liked by everybody who met him and was a friend to all. He was a jokester some would say a “Bullshitter”. His favorite things to do were fishing and riding his motorcycle. The love of his life was Caitlin Church who he was planning to marry on August 1st of next year. He was predeceased by his father Richard Rouse. Survivors include his mother Tammy (Rich) Gaughan; sons Nethius “Beaner” and Laviethan “Vi” Rouse; fiancé Caitlin Church and her children Julien, Zachary and Aubrey; brothers Walter (Maggie) and Richard (Ashley) Rouse; several aunts, uncles, nieces, nephews and cousins. A celebration of life and graveside services for James will be held at a later date. Online condolences and messages to the family may be made at www.flynnbrosinc.com