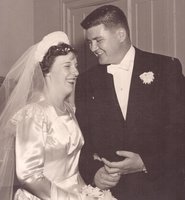 Raymond J. Zerwick, 93, a longtime resident of Church St. in Schuylerville, passed away Friday, October 9, 2020 at Washington Center in Argyle, NY. Born July 12, 1927 in Watervliet, NY he was the son of the late Robert and Mary Farrell Zerwick. Ray was a proud member of “The Greatest Generation”. He served honorably in the US Navy (Seabees) during WWII and Korea. That generation won the wars in Europe and the Pacific, but even more impressive was their lives after the war. They put service to their country, family, community and faith ahead of anything they wanted for themselves. Ray worked at Behr-Manning/Norton Co./ St. Gobain in Watervliet as a machinist for over 40 years. He was Chief of their in-house fire department, served on the Safety Committee and Benefits Committee. After returning home from his “day job”, at least one night a week he would change into his NYS Fire Instructor uniform and go teach at a volunteer fire department somewhere in Saratoga County. An entire generation received their introduction to firefighting and more advanced classes from Ray. Thursday night was drill night for Schuyler Hose Co. where Ray had been a member for 63 years and had been Chief for 25 years. With help from many others, Schuyler Hose Co. became one of the best volunteer fire departments anywhere. He trained and developed young firefighters into the future officers of the department. Ray was a communicant of Notre Dame-Visitation Church, life member of the Knights of Columbus, member of Old Saratoga Post #278 American Legion in Schuylerville and was a founding member of the Saratoga National Cemetery Honor Guard. He was proud to honor his fellow veterans and loved being in the company of that group. His final, and in a way most difficult act of service was caring for his wife Theresa as her illness progressed. When she could no longer remain at home, he went to the nursing home almost every day. A lot of hours were spent just sitting there holding her hand. It is a beautiful 71 year love story. In addition to his parents, he was predeceased by his son-in-law, Fred McGreevy. Survivors include his wife Theresa Zerwick; his son Timothy J. Zerwick of Schuylerville; his daughter, Peg McGreevy (Ed Grow) of Flagler Beach, FL; grandchildren, Timothy McGreevy, Tracey (Scott) Cranston, Paul (Jenna) McGreevy, Joseph (Trudy) McGreevy; and several cousins. A private funeral mass will be celebrated at Notre Dame-Visitation Church in Schuylerville for the family. Burial will be at a later date to be announced at the Gerald B.H. Solomon Saratoga National Cemetery in Schuylerville. Due to COVID restrictions and limited attendance permitted for the funeral service and visitation, Rays family would like to invite members of the community to line Church Street in Schuylerville to pay their respects on Wednesday, October 14, 2020 at 12 noon to watch Ray’s funeral procession proceed one last time past Rays house prior to the “Last Alarm” Ceremony at the Fire House, and then continuing down Green Street. Ray will be missed by family and friends, but it was time to move on to the next step in his journey. He accepted and was at peace with that. Despite adversity, his faith in God remained unbreakable. The family would like to thank the staff at Washington Center for the wonderful loving care he received while he was a patient there. In lieu of flowers, memorials in Ray's name can be made to Schuyler Hose Company, 35 Spring St., Schuylerville, NY 12871.