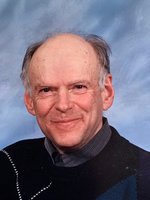 David Gregg Flynn, 76, passed away peacefully on Monday, November 16, 2020 in Hydeville, VT. Born December 4, 1943, in Milton, Massachusetts, the son of the late David V. and Dorothy (Gregg) Flynn. David graduated from Briarcliff High School, Briarcliff, NY in 1962. He began working for the US Post Office in Pleasantville, NY as a mail handler, where he retired after 28 years of service. He was a member of the Boy Scouts, Demolay and a dedicated Mason in Pleasantville for many years, once honored as Mason of the Year. Several years after his parents’ passing, he moved to Greenwich to be closer to his sister, Deborah Anderson, and family. He worked for several years at the IGA and then at Hannaford when it opened. For 15 years David was a familiar sight, collecting carts at Hannaford and walking back and forth to his home on Main Street. The family is incredibly grateful for the kindness in the community, offering rides and friendly support. He was a member of the Fort Miller Reformed Church, where he sang faithfully in the choir every week. His church family was a great comfort to him, and Henk DeJong was always a special friend to him. David loved watching sports and vintage comedy shows and sharing meals with his sister’s family. Although a man of few words, he was a gentle soul, living an ordered and peaceful life. David is survived by his sister, Deborah Anderson (Mark) of Greenwich, and Judy LoBalbo of Bristol, Tennessee. He also is survived by nephews Reed, Carl, and Luke Anderson of Greenwich, Evan LoBalbo of Tennessee, and Eric LoBalbo of Washington State. The family would like to express their thanks to all those who were so kind to David; to the staff at The Cambridge where he lived for 3 years, and especially to the owner of his last residence at Misty Heather Morn Assisted Living in Hydeville, VT, Francetta Tice and her staff. Fran has been our angel on earth during David’s convalescence. We are so blessed to have had her care for David during the last months. Due to COVID-19 precautions there will be no services at this time. Interment will be held in the Spring at the Fort Miller cemetery. Online condolences and messages to the family may be made at www.flynnbrosinc.com