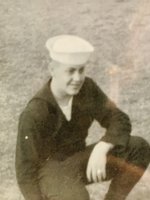 Thomas B. Perry, 82, a long life resident of the Saratoga Springs area, passed away Sunday, November 22, 2020 at Saratoga Hospital surrounded by his loving family. Born August 26, 1938 in Greenwich, NY he was the son of the late Thomas and Amanda Straight Perry. Tom was a US Navy Veteran serving from 1956-1962. He started his career working at the Hudson Pulp & Paper/Georgia Pacific Mill in Clarks Mills, NY. Tom later continued on working at Citron Upholstery in Peekskill, NY., where he traveled back and forth for nearly 25 years until he retired. He always enjoyed spending time with his family and friends. In addition to his parents, he was predeceased by his wife, Leona Perry in 2001; his brother, James Perry; and sisters, Shirley Norton, Elizabeth Perry, and Delores Manney. Survivors include 5 children, William Manney, James Perry, Cathy Perry, Brenda (Terry) Brisco, and Scott (Lauri) Perry; several grandchildren, great grandchildren, nieces and nephews. A private service for family will be held at the Gerald B.H. Solomon Saratoga National Cemetery in Schuylerville.