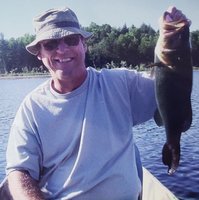 George Mayer Rapp, Jr., 74, of Greenwich, passed away at his home on November 28, 2020. George was born in Albany, New York on October 8, 1946, to Mary Francis (Fleming) and George M. Rapp, Sr. He grew up in Salem, New York, graduating from Salem Washington Academy and then SUNY Plattsburgh with his B.A. in Education and Math. He married Katherine Ann (Prime) Rapp on August 17, 1968 in Douglaston, NY. He worked at the General Electric Company in Hudson Falls/Fort Edward for nearly 30 years, retiring in 2002. He was a veteran of the Vietnam War, serving in the US Navy from 1968 to 1972. George was an avid outdoorsman, dedicating much of his recreation locally to hunting, fishing, camping, and boating. He was happiest sharing these times with family and friends. In addition to his parents and grandparents, George is predeceased by his stepfather, Norman Button; his in-laws Hubert S. Prime and Mary Jane K. Prime; his two brothers-in-law Alan J. Hart and Roger H. Prime; and sisters-in-law Cynthea (Davis) Prime and Judith Gazzola. George is survived by his wife of 52 years Katherine Ann (Prime) Rapp, children G. Daniel and Elizabeth Rapp of Sunbury OH and Michael J. and Erica Rapp of Guilderland NY, his sister Nancy A Hart of Loudonville, his brothers John and Hollie Rapp of South Glens Falls and Thomas and Maura Rapp of Salem and his sister-in-law Liza Larios of Bellerose NY. He is also survived by his grandchildren Joshua M, Joel D and Lucas C in Ohio, Amelia Jane in Guilderland, his great-grandchild Natalie Noelle in Ohio, cousins and many nieces and nephews who meant the world to him. The family wishes to extend their sincere thanks to John Stoutenburg MD, B. Frazier Taylor MD, Timothy Zager MD, Alex Frank MD, Alex and the nurses, Lisa and the staff at the C R Wood Cancer Center, and George’s Primary Physician Frank Westad NP, as well as to the kind professionals of Community Hospice. In lieu of flowers, it is suggested that memorials may be made in George’s name to the C R Wood Cancer Center at Glens Falls Hospital or to the dedicated volunteers of the Greenwich Easton Rescue Squad. Family will gather for a military service at the Gerald B. H. Solomon Saratoga National Cemetery on Friday, December 4 at 11 AM. A celebration of George’s life will be held at the convenience of the family when it is safe to do so. Arrangements are under the direction and care of Flynn Bros. Inc., Funeral Home in Greenwich. Online condolences and messages to the family may be made at www.flynnbrosinc.com