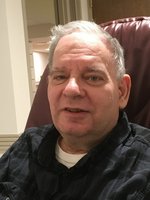 Ronald James Dewey, 64, passed away on Wednesday, December 9, 2020 at Fort Hudson Nursing Facility following a long illness. He was born in Cambridge, NY on July 22, 1956 to the late James and Norma (Wildey) Dewey. Ron was a hardworking farmer most of his life, taking over the farm at age 14 and working it until 1993. After farming, he went to work at Eastern Castings in Cambridge, NY until 2009 when he retired. While in grade school, Ron was highly active in the FFA, 4-H and showed his Holstein Cows at the Washington County Fair. He graduated from Greenwich Central High School in 1976. Ron was first and foremost a loving husband, father, and “Pop Pop”. He was easy to get along with and always had a smile on his face. Some of his favorite things were picnics, gardening, fast cars, and going to the ocean with his wife. Ron is survived by his wife of 18 years, Shirley (Mattison) Dewey of Greenwich; son Adam (Tamara) Dewey of Argyle; daughter Holly Dewey of Argyle; his special joys in life, his grandchildren Dustin and Aurora Dewey; sister Deborah (Dick) Henley of Cambridge; brothers-in-law Dennis, David, Timothy, Stanley Sr. (Sandy) and Michael; Several aunts, uncles, cousins, nieces, and nephews. Donations in Ron’s name can be made to the Greenwich FFA, 10 Gray Avenue, Greenwich, NY, 12834 or the Fort Hudson Nursing Facility, 319 Broadway, Fort Edward, NY, 12828. A funeral service will be held at 12pm on Monday, December 14, 2020 at Flynn Bros. Inc. Funeral Home,80 Main St, Greenwich, NY, 12834. Burial will be in the Greenwich Cemetery. Family and friends may call from 11 to 12pm on Monday, December 14, 2020 prior to the service at the funeral home. Due to COVID-19, masks and social distancing will be required inside the funeral home with a maximum of 30 people allowed inside at a time. The family wishes to extend their deepest gratitude to the staff at the Fort Hudson Nursing Facility especially D-Wing for their excellent care of Ron. Online condolences and messages to the family may be made at www.flynnbrosinc.com.