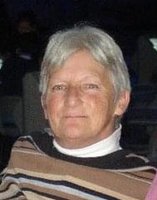 Patricia Bayly, (aka Grammy and Gramcracker) passed away peacefully Sunday morning December 13, 2020 surrounded by her family at her daughter’s home in Middle Grove, NY. Born July 13, 1952 in Troy, NY she was the daughter of the late John and Virginia Brickner Farrington. Pat had many jobs throughout her life, including server, bus driver and child care provider. She retired from the food service industry at the Saratoga Racetrack. She was also an auxiliary member of the American Legion for years. She had a voracious work ethic, could fix anything on her own and enjoyed cooking for others. She had the biggest heart and would help anyone in need. She cherished the beauty in nature and shared this love with her children and grandchildren. Sunrises, sunsets, hummingbirds, and cardinals will always be symbols of her memory. She constantly read to and played games with her grandchildren. Pat enjoyed campfires and sing-a-longs with extended family. In addition to her parents, she was predeceased by her husband, Bernard Bayly in 2003; a son-in-law, Brent Smitley; and siblings Deb Harley, Andrea McBain, Gary Farrington, Jack Farrington and Mike Farrington Survivors include her children, Stacy (Michael) Cesta of Mokena, IL, Marcy Smitley of Fortville, IN, Tracy Merchant of Schuylerville, NY and Brook (Garett) Borho of Middle Grove, NY; her grandchildren, Micaela, Gregory, Garrett, Cody, Parker, Lawton, Sydney, Kya, Braden, Noah, Jaxen, and Rylan; and siblings Gail Hartley, Mickey Farrington, Kathy Navojosky, Cindy Farrington, Don Farrington, Timmy Farrington, Jeff Farrington. A graveside service will be held in the summer of 2021 at the Gerald B.H. Solomon Saratoga National Cemetery in Schuylerville. Memorials can be made in her name to Community Hospice of Saratoga, 179 Lawrence St., Saratoga Springs, NY 12866.