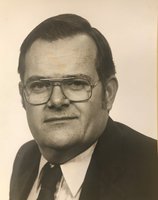 Peter Gibson, 85, passed away peacefully Friday, December 29, 2020 in Hardy, Arkansas while staying with his son Jeff and family. He was born May 23, 1935, in Lockport, NY to the late Raymond “Gibby” and Retha (Ernest) Gibson. Peter graduated from Lockport High School. He was a member of the Brunswick Presbyterian Church and was a Mason. Peter had a passion for farming and loved to farm his land in Pattersonville. The turning point in his life was when he stopped farming and took a Dale Carnegie course, “How to Win Friends and Influence People.” That course would lead him in a successful career of selling farm equipment, owning, and operating Capital Tractor from 1966-1990. He was a hard-worker and problem solver which helped him excel in real estate and property management. He liked dining out, often having family dinners on Friday nights for many years at the Italia in downtown Troy and more recently at the Man of Kent and Smith's in Cohoes. Weekly card games with the Hewitt’s and the Tate’s, were a joy in his life. He loved to travel, and many cruises were taken in his youth as well as trips to Florida and Alaska. He loved his dogs and always talked about Hobo and Sarah. He took his Toy Yorkshire Terrier Angel with him everywhere. When Margaret was not watching, He and Angel enjoyed sneaking out to get ice cream together. His legacy will be one of “always closing the next deal.” He is predeceased by his wife of 50 years Janice Gibson; son John P. Gibson and stepdaughter Patricia Yoxall. Survivors include his beloved sons Jeff (Wendy) and Jamey (Connie) Gibson; grandchildren Lindsey, Dustin, Peter, and Dylan Gibson, Felecia Squires; daughter-in-law Donna Gibson; 5 great-grandchildren; 4 stepsons Gordy, George, Tom, and Joseph Schmid; longtime companion Margaret Wagar. Funeral services for Peter will be private with a celebration of life to be held for family and friends at a later date. Donations in Peter’s name may be made to the Brunswick Presbyterian Church, 42 White Church Lane, Troy, NY, 12180. Online condolences and messages to the family may be made at www.flynnbrosinc.com