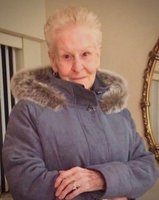 Edna Marley Wall, 92, passed away Thursday, February 4, 2021 at Wesley Health Care Center in Saratoga Springs. Born August 14, 1928 in Brooklyn, NY she was the daughter of the late William H. Marley and Minnie Kirshbaum Marley. She was raised and educated in Jamaica Estates, Long Island, NY. She married her husband, the late Reese E. Wall on March 19, 1945. He passed away June 13, 2003 after 58 years of marriage. Edna was a homemaker and took great pride in her home. Her greatest love and devotion was to her family. She and her late husband lived in Greenwich, NY for 40 years before moving to Embury Apartments in Saratoga Springs. She was a member of Malta Presbyterian Church. In addition to her parents and husband, she was predeceased by 2 infant sons; her only brother, Harry B. (Ann) Marley; and 2 sisters, Dorothy (Henry) Kaltenboch and Maude (Howard) Bell. Survivors include her daughter, Deborah A. Wall Denno of Arizona; 2 grandchildren William Marley Flax-Leight (Jamie) of Malta, NY and Annice A. Larkin (David) of Chandler, Arizona; 2 great grandsons, Gabriel and Michael Larkin; 1 great granddaughter, Natalie Reese Larkin; her sister and brother-in-law, Catherine Jane (Dr. Kenneth) Thygesen of Cossayuna, NY. At her request, there will be no calling hours. Spring burial will take place in South Argyle Cemetery with the rest of her family. Memorial donations may be made in her memory to Community Hospice of Saratoga, 179 Lawrence St., Saratoga Springs, NY 12866 or Mary’s Haven, 35 New St., Saratoga Springs, NY 12866,