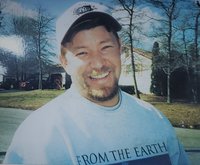 James Robert Allen Jr., 54, a resident of Rimbrave Dr. passed away Thursday April 8, 2021 at his residence following a long illness. He was born September 1, 1966 in Brattleboro, VT to James and Lucy (Morris) Allen. James loved horses he was a cowboy thru and thru, some would say he loved them more than people. At the age of 3 he was given his first pony and from that day forward horses and horse racing was in his blood. Many days were spent racing horses at the Saratoga Harness Track or traveling across the states with his horses. Family meant everything to him and he loved his daughter, grandfather, parents, and siblings more than anything in this world, even horses. He graduated from Schuylerville, and in his youth was somewhat of a wild child with a mischievous side. He was a diehard NY Giants and Yankees fan. If you weren’t a fan of those teams, he would let you know or just disregard you in general. He suffered a car accident and for the past 20 years he has been living as a quadriplegic. His quality of life surely diminished, but he was an Allen stubborn and fearless, and he didn’t let his ailments hinder his abilities. James’s daughter was the most important thing in his life and she was the reason he kept going, his last words to her before he passed was how proud he was of her. He was always there for anyone who needed help and lived by the motto “sacrifice today for a better tomorrow”. The family wishes to thank his brother Sid and his right-hand woman, his mother Lucy for allowing him to live life to the fullest these past 20 years. He is survived by his daughter Felicia Rennick and her companion Brennan Wilson; mother and father Lucy and James Allen Sr.; brothers, Mark (Kendall Scire) Hansen, and Sidney Allen; grandson Ethan Grimley; nephews Ben Scire and Derek Hansen A celebration of James’s life limited to close family and friends will be held at 6pm on Monday, April 12, 2021 at Flynn Bros. Inc. Funeral Home, 13 Gates Ave Ext., Schuylerville, NY, 12871 with Celebrant Jason M. Easton officiating. Family and friends may call from 3 to 6 pm prior to his service at the funeral home. Due to COVID-19 restrictions masks will be required inside the funeral home at all times and a limited number of people will be allowed inside. Donations in his memory may be made to the Saratoga Harness Track, 342 Jefferson St, Saratoga Springs, NY, 12866. Online condolences and messages to the family may be made at www.flynnbrosinc.com.