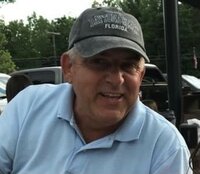 Joseph Vito Petralia, 67, lifelong resident of Schuylerville, passed away peacefully Sunday, August 22, 2021 at Saratoga Hospital, with his daughter by his side following a battle with COVID-19 He was born on October, 28, 1953 in Saratoga Springs, NY to the late John Joseph and Sadie Messengale Petralia. Joseph served his country proudly in the United States NAVY from 1977-1981. In the NAVY he studied electronics engineering. After his service he worked for many years at Northern Fire Systems, where he designed alarm and safety systems. Horseracing and betting the ponies has always been a passion for Joe, he definitely was known to gamble from time to time. He was a member of the Old Saratoga American Legion Post #278, where he spent most of his free time. The legion members were Joe’s 2nd family and he was known for making sure the pull tab machine was working properly. Joe enjoyed golfing, riding his motorcycle, cooking, and making sure you knew how good his dish was. Joe was known to be a talker and talk loudly, you could hear him over anything going on in the background, if Joahna had a penny for every time she told him shhh! shed be rich. Joe certainly was the best father and papa his daughter and grandchildren could have ever had. He was always attentive to their needs, and sacrificed anything he could for them. He always supported his daughter’s sports games and activities, never missing one, and he would babysit or help anyone in need at the drop of a hat. Joe inherited the family trait of being artistic, his penmanship was perfect, and he enjoyed creating signs and posters for different events throughout the area. Joe always supported charity events by purchasing raffle tickets and he was the self-declared bookie at the legion. He will be missed by all who knew him, and he will be up there waving the peace sign down on all of us. He is survived by his daughter Joahna Petralia of Greenwich; grandchildren Aliyah and Mya Burth; brother Wayne Petralia of Schuylerville; niece and nephew Nikki and Morgan; several special friends and his American Legion family. Family and friends may call from 5 to 7 pm on Thursday, August 26, 2021 at Flynn Bros Inc. Funeral Home, 13 Gates Ave Ext. Schuylerville, NY, 12871. A funeral service will be held at 8:30 am on Friday, August 27, 2021 at the funeral home. Burial will follow at 9:30am in the Saratoga National Cemetery. Motorcycle riders from the legion and patriot guard, are asked to please line up outside the funeral home prior to the funeral service. Following Joe’s burial family and friends are invited to a reception at the Old Saratoga American Legion. Due to COVID-19 the family requests all patrons attending Joe’s services to wear masks. In lieu of flowers donations in his memory may be made to the Old Saratoga American Legion, 6 Clancy St, Schuylerville, NY, 12871. Online condolences and messages to the family may be made at www.flynnbrosinc.com