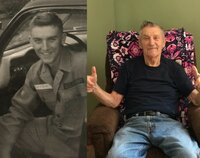 Wallace Wally. “Captain” Hoffman, 83, a lifelong resident of Greenwich, passed away peacefully, Wednesday, September 29, 2021, at Glens Falls Hospital following a brief illness. He was born in Greenwich, NY on August 27, 1938, he was the third son to the late Frank Jr. and Violet (Green) Hoffman. Wallace graduated from Greenwich Central School and went on to serve his country proudly in the United States ARMY from 1955-1958. He was a communicant of St. Luke’s Episcopal Church in Cambridge. He worked for Steven & Thompson Paper Co., Whiteside Fuel Oil Co., and retired from Peckham Material after 30 years of service. On August 5, 1961, he married Evelyn Bounds at St. Joseph’s Church in Greenwich. Wally was an avid NY Giants, NY Yankees, and horseracing fan. Some of his favorite things to do were watching his grandkids play sports, McDonald’s with the NIMO guys, Stewart’s coffee klatch, and looking after his neighbors’ cats GiGi and Ty. Wally will always be remembered as a kind, generous, humorous man, who loved his family In addition to his parents, he was predeceased by his brothers Kenneth, Ronald, and Bryan, father and mother-in-law Harry and Catherine Bounds. Wally is survived by his loving wife of 60 years Evelyn B. (Bounds) Hoffman; daughters Kathleen (Dan) Hoffman-Hart and their children Brayden and MacKenzie, Christine Watkins and her children Levi (Haleigh) Gage and Alec (Kalista) Watkins; two great-grandchildren Grayson and Noah. A graveside service with full military honors will be held at 1pm on Wednesday, October 6, 2021, at the Gerald BH Solomon Saratoga National Cemetery, 200 Duell Rd, Schuylerville, NY, 12871 with Fr. Matt Baker officiating. Donations in his memory may be made to St. Jude’s at www.stjudes.org. Online condolences and messages to the family may be made at www.flynnbrosinc.com.