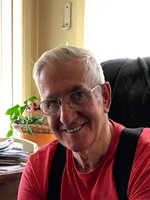 Don passed peacefully on September 30, 2021 surrounded by family. Don was the son of the late Harry and Katherine Bartolucci. He grew up in Valley Falls, NY and as a child he was active in the Boy Scouts and was a member of the Green Sabres. He was predeceased by his wife, Mary Jane and his sister Patricia. Don leaves behind his son Donald P. Bartolucci Jr. (Christine) and his daughter Deborah A. LeBaron (Timothy). He also leaves behind his grandchildren Erika (Jason) Cota, Danielle LeBaron, Kaitlin LeBaron (Kevin), Anthony Bartolucci, Alex and Reagan Wagoner; his great-grandchildren Oscar, Bodhi, Madalynn, and Olive; and his siblings Ellen, Nancy, Judy, Marie, and Jerry. Don married the love of his life Mary Jane and began a life for themselves in Schuylerville, NY. He started working at a very young age and eventually built his plumbing and heating business from the ground up and valued all of his customers. Don never failed to help anyone that needed him no matter what time of day. He enjoyed many years of hunting, camping, riding snowmobiles and boating with his family and friends. Many of his later years were spent riding with Mary Jane and their GWRRA motorcycle club and for twenty years they volunteered at the Americade Motorcycle rally in Lake George, NY. He will forever be missed by his family and the many people he had the privilege of meeting over the years. The family would like to thank Hospice for their care and support. In lieu of flowers, donations can be made to the family for a later scholarship to be set up for a graduating senior pursuing a career in an HVAC trade. 263 North Broad St. Schuylerville, NY 12871. A funeral mass will be held at 10am Tuesday October 5, 2021 at Notre Dame-Visitation Church, 18 Pearl St., Schuylerville. Donald and Mary Jane will be laid peacefully to rest at Meadow Lawn Cemetery in Petersburg at a later date. Family and friends may join the family at Don’s home following services.