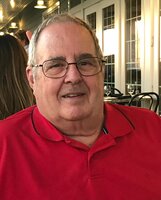 Mr. Robert E. Lundberg “Bob”, 85 of Surprise, AZ, beloved partner of Carol Flannigan, passed away peacefully on October 6, 2021, at Banner Del Webb Hospital under the care of Hospice, surrounded by his loving family. Born in Cambridge, New York, he was the son of the late Edward and Ruth (Wolff) Lundberg and brother to the late David Lundberg. Bob left the family farm in Easton to attend SUNY Morrisville as well as Clarkson University, where he studied electrical engineering. He embarked on a long rewarding career as an engineer for General Electric after which he established his own consulting business which he enjoyed for nearly 20 years before his retirement well into his 70’s. He loved his work which took him to several countries where he was very successful navigating international business cultures. Bob had a tremendous commitment to education and served as a member of the Greenwich Central School Board in Upstate New York for nearly 15 years. When asked by one of his daughters what he would do if he won the lottery, his response, “make sure every child at Greenwich High school had an opportunity to go to college.” Bob had a strong sense of home for Greenwich/Easton, NY where he always treasured the family farm and hunting season traditions with his son, brothers, extended family, and friends. He will be fondly remembered for his love for his family, dedication to the Greenwich Central School education system, for his soft and humble demeanor, great sense of humor, and endless wisdom. Surviving Bob in addition to his beloved partner Carol are his children, Jill Lundberg of Essex, CT, David Lundberg and his wife Aindrea of Greenwich, NY and Ann Lundberg of Lawrence, KS, as well as his grandchildren Trevor Lundberg, Rebecca Lundberg, Garrit Lundberg and Jake Marmelstein; great grandson Greyson Lundberg; and his brother Jack Lundberg. He is also survived by many cousins, nieces, and nephews. A funeral service will be held at 11am on Friday, October 15, 2021, at Flynn Bros Inc. Funeral Home, 80 Main St, Greenwich, NY, 12834 with Celebrant Jason M. Easton officiating. Interment will immediately follow in the Easton Rural Cemetery. . Family and friends may pay their respects to Bob and visit the family, from 4 to 7pm on Thursday, October 14, 2021, at the funeral home. In lieu of flowers, expressions of sympathy, or donation's by check specifically, may be made in Bob’s memory to The Robert E. Lundberg Scholarship Fund, and sent to Jill Lundberg, 16 Birch Mill Trail, Essex, CT, 06426, to honor his vast contributions to education over the years. For other means by which to donate please call 860-961-0443. Online condolences and messages to the family may be made at www.flynnbrosinc.com.