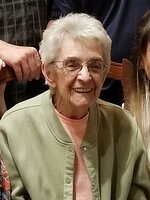 Luella George Relyea, 85, passed away at her home on Friday, November 5, 2021 surrounded by her family. Born March 6, 1936 in Mechanicville, NY she was the daughter of the late William and Palmena Borden George. Luella was a graduate of Mechanicville High School Class of 1953. She retired from Victory Specialty in Victory Mills, NY. She was a parent member of the Avant Garde Drum and Bugle Corps and had been a Boy Scout and Cub Scout Leader. She was a member of the Old Saratoga Seniors, was a communicant of Notre Dame-Visitation Church, and a member of the Catholic Daughters. She married Robert Relyea June 2, 1957. He predeceased her April 9, 2002. In addition to her parents and husband, Luella was predeceased by 5 brothers, William, Raymond, Albert, Edward and John “Jack” George; and 1 sister, Mary Ellen DelVecchio. Survivors include 3 sons, Robert Relyea Jr. (Lynn) of New Orleans, LA, Lynn Relyea (Heather) of Rochester, NY and Kevin Relyea of Ballston Lake, NY; 1 daughter, Roxane Major of Greenwich; 9 grandchildren, Robert III (Kasia), Tom (Danielle), Kelly (Brendan), Stephanie (Zach), Danielle (Dan), David, Sean (Laura), Carl, Kyle; 4 great grandchildren, Skylar, Mack, Hudson, Walter; and several nieces and nephews. A funeral mass will be celebrated at 10am Tuesday, November 9, 2021 at Notre Dame-Visitation Church. Burial will follow at 11:30 in the Gerald BH Solomon Saratoga National Cemetery in Schuylerville. Friends may call on Monday from 4-7pm at Flynn Bros. Inc. Funeral Home, 13 Gates Ave., Schuylerville, NY 12871. Memorials can be made in her memory to Community Hospice, 179 Lawrence St., Saratoga Springs, NY 12866. The family asks that masks be worn by all at the visitation and the church for the funeral.