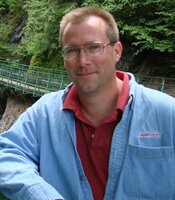 Thor David Schafer passed away at his home on Monday, November 15, 2021 at the age of 52. Born July 30, 1969, he was the son of the late Frederick P Schafer III and Mary Lou Whelden Schafer of Easton, NY. Thor graduated from Greenwich Central School in 1987, attended Mississippi State University and graduated from SUNY Cobleskill where he earned his Bachelors’ degree in Plant Science. Thor worked on the Schafer family farm, Hickory Hollow, throughout his early life; and it was there that he developed an affinity for all animals and love for farming. After college, Thor continued farming at Hickory Hollow and other Easton farms. He stayed connected to the farming community through his work, where many of his jobs involved working directly with farmers through equipment sales. Many may remember Thor from his time at Hudson River Tractor and most recently White’s Farm Supply. Thor was compassionate and had a gentle soul. Those who knew Thor know that he felt an overwhelming need to help anyone however he could. He enjoyed hunting, riding snowmobiles and watching the Pittsburgh Steelers. Thor was able to make friends easily, especially if they could talk about farming. His friends and family were most important to him. Thor was predeceased by his parents and nephew, Zachary Tillapaugh. He is lovingly remembered by his siblings: Phillip (Kim) Schafer, Cynthia (Charles) Decker, Leith (Ann) Schafer, David (Sherida) Schafer, Mary (Stuart) Tillapaugh, Fred Schafer and Sally (Mark) Graziano; former wife and friend Paula Burke, as well as many nieces, nephews, great nieces and great nephews. Donations can be made in Thor's memory to the Greenwich Central School FFA at 10 Gray Avenue, Greenwich, NY 12834. At his request, there will be a private memorial service for the family. Arrangements are under the direction of Flynn Bros. Inc. Funeral Home, 80 Main St., Greenwich, NY 12834.