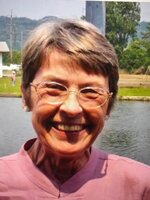 Danilee Ruth Gorman Poppensiek died peacefully in her sleep at home on December 5, 2021 at the age of 78 from complications from emphysema. Danilee’s happiest times were spent with her daughters and their families, who survive her; Michelle Wolf (Corey), and Megan Woolley and her husband Paul, and their daughters, Lily May and Grace Jane. She is also survived by her sister Kathleen Sprague, brother-in-law Marco Sartori, and numerous cousins, nieces and nephews. Danilee was predeceased by her husband Neil in 2008; her parents, Daniel and Mildred Carlough Gorman; her sister, Linda Sartori; and her brother-in-law Michael Sprague. Danilee was born in Ithaca, NY on August 5, 1943 and lived there until moving to the Saratoga area in 2012 to be closer to family. She always remained an Ithacan in her heart. After graduating from Ithaca High School in 1961, she briefly attended the University of Buffalo and Ithaca College. Danilee worked for Cornell University for 47 years, retiring in 2009. She was privileged to have worked with many wonderful Ombudsmen from Alice Cook to Walter Lynn. She was honored to be a recipient of the Cook Award, for her work on numerous University committees which improved the working lives of women at Cornell. Danilee served as the University’s first Victim Advocate, was founding member of Cornell’s first infant care center, and founding member of the Task Force for Working Families. Over the years she was also active in several Ithaca organizations including Suicide Prevention and Crisis Service, Tompkins Girls Hockey Association, Dessie Jacobs Softball League and the Ithaca Dog Training Club. She enjoyed being a member of the IHS Class of ’61 Reunion Committee. As much as she enjoyed and took pride in her years at Cornell, the best part of her life and her greatest joys came as a mother to Michelle and Megan. She loved sharing their lives, attending every soccer and hockey game, swim meet and piano recital, and the day to day events playing board games, cards, doing puzzles and reading. Sharing the same activities with her granddaughters, Lily and Grace, brought her special joy. In addition to spending time with her family, Danilee enjoyed embroidering, reading, word and jigsaw puzzles, and the joy and comfort of numerous “furry friends”. Danilee will always be remembered for her kindness, her sense of humor, and the love she gave her family. She will be greatly missed. At Danilee’s request, services will be private and flowers are graciously declined. She would love for those wishing to remember her to give their families and friends a special hug. Memorials can be made in her memory to Community Hospice of Saratoga or the charity of one’s choice. Charities helping abused women, children or animals were especially important to her.