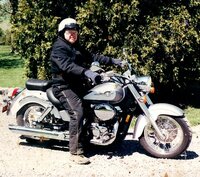 Walter “Jimmy” Grimes III, 82 a resident of Old Cambridge Rd, said his last “We’ll see Ya later” on Monday, December 6, 2021, at home surrounded by his family. He was born May 18, 1939, in Easton, NY to the late Walter J II. and Viola (Linendoll) Grimes. Jimmy was born and raised on the family farm in Easton. He used what he learned on the farm, to become a successful Diesel Mechanic at the former Gerry’s Service Station in Greenwich. Jimmy loved anything with an engine, many good times were had fishing on his boat, riding his snowmobile, and riding his beloved Honda 750 VFR Motorcycle. He enjoyed the outdoors and time spent hunting. Jimmy was a jokester, who always provided others with a laugh, when asked how he was feeling he would reply “with my hands”. He was well known in the Greenwich area, and you could find him most days having coffee at the local Stewart’s. When he was able, you could find him roller skating at Guptles or Skateland. He was a loving father, grandfather, and friend to many, and will be missed. In addition to his parents, he was predeceased by his brothers Donald and Gerald Grimes; children John David Fiolich and Summer Ann Grimes. Survivors include his children, sons Dennis Grimes of Easton, Joseph (Ashley) Grimes of Easton and Stephen Allen; daughters Sharon (Charles) Shissler of Shushan, and Susan (Randy) Sloan; sister Dolores “Pansy” Williams; 9 grandchildren; 6 great-grandchildren; several nieces and nephews; his beloved dog chevy. Funeral services will be held at 11am on Friday, December 10, 2021, at Flynn Bros Inc. Funeral Home, 80 Main St, Greenwich, NY, 12834. Burial will follow in the Woodlands Cemetery, Cambridge, NY. Donations in his name may be made to the St. Jude’s Children’s Hospital at www.stjudes.org. Online condolences and messages to the family may be made at www.flynnbrosinc.com