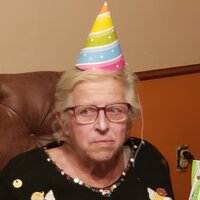 Fort Miller – Sharon L Blanchard, 70, of Fort Miller, NY, daughter of the late Harold Blanchard and Myrna Davis, passed away peacefully on the morning of December 22, 2021 surrounded by her children, after a long battle with COPD, CFH, and kidney disease. Sharon was born in her grandmother’s home in Bolton Landing. She lived in Bolton for her early childhood years and began school in Bolton. Her family moved eventually to the Schuylerville area, and she graduated from Schuylerville in 1969. She started working at the Glens Falls Insurance Company within weeks of graduation and worked there for over 30 years. She then had a second career with New York State, working in the Bookstore at Empire State College for 15 years. She retired last year and spent most of her time reading (she read 1000’s of books in her lifetime), watching Judge Judy, reruns of old shows, and playing games on her tablet. She also enjoyed crocheting, sewing, and spending time with her family. And her favorite past time was probably buying scratch-off tickets. In addition to her parents, she was predeceased by two brothers: Jody Blanchard and Harold “Duffer” Blanchard. Sharon is survived by her children: Brett Blanchard of Hudson Falls, Jennifer Blanchard of Fort Miller, and Jeremy (Christine) Blanchard of Corinth; her grandchildren Noah Blanchard and Lila Bentley; brothers Randy Blanchard, Herbert Blanchard, and Dale Blanchard; sisters-in-law Cynthia Blanchard and Jo Blanchard; and several nieces and nephews. Per Sharon’s request there will be no public calling hours. Her family will host a private memorial service in the New Year. Graveside service in the spring for the immediate family.