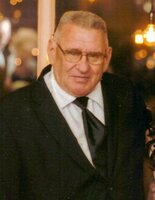 Arthur R. Sutliff, 78, a resident of Burgoyne Rd. in Schuylerville, passed away at home on Sunday, June 12, 2022. Born December 18, 1943 in Fort Ann, NY he was the son of the late Frank and Helen Dennison Sutliff. Arthur was a US Army Veteran having served from 1963-1965. He had worked for Hudson Pulp and Paper, Georgia Pacific, Stevens and Thompson, then as groundskeeper for the Saratoga Harness Track. He enjoyed bird watching, flowers, hunting, walking and spending time with his grandchildren. In addition to his parents, he was predeceased by his wife, Shirley C. Sutliff in 2001; and 1 brother, Allen Sutliff. Survivors include his daughter, Tracy (Walt) Hayes of Schuylerville; his son, Arthur W. Sutliff of Schuylerville; 2 brothers, Frank and Milton Sutliff of Oklahoma; 5 grandchildren, 3 great grandchildren, several nieces and nephews. A funeral service will be held at 1 pm on Thursday, June 16, 2022 at Flynn Bros. Inc. Funeral Home, 13 Gates Ave., Schuylerville, NY. Burial will follow at 2:30pm in the Gerald B.H. Solomon Saratoga National Cemetery. Friends and family may call on Wednesday, June 15, 2022 from 4-6pm at the funeral home. Online remembrances can be made at www.flynnbrosinc.com Memorials in his memory can be made to St. Jude Children’s Research Hospital, 501 St. Jude Pl, Memphis, TN 38105-9959.