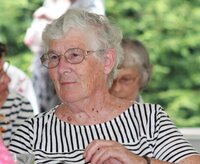 Janet Aldous, 89, a lifelong resident of Greenwich, passed away peacefully Tuesday, June 14th, 2022. Born April 20, 1933, in Greenwich, NY she was the daughter of the late Leo and Elizabeth Nash. Janet graduated from Greenwich High School in 1951 and went on to earn her teaching degree from SUNY Plattsburgh. She married the love of her life, Clayton Aldous, on June 30th, 1956, and they enjoyed 60 years together. Janet taught school for 30 years, mostly 4th grade, at Greenwich Central School. She was a communicant of St. Joseph’s Church, where she enjoyed daily and weekend mass. Janet was an avid antique collector and enjoyed decorating her house seasonally, especially at Christmas when she would open her home to the Greenwich Holiday Tour of Homes. Many of Janet’s weekends were spent going to local garage sales looking for her “Antique Road Show” piece! She also loved a good craft fair. Until the day she passed, she was convinced she was going to win Publisher’s Clearing House! Janet loved sports! You would be hard-pressed to attend any Greenwich sporting event and not find her there with Clayton. In fact, she was inducted into the Greenwich Athletic Hall of Fame in 2012. She remained a Greenwich Witches fan right up until her passing and was very proud of the State Champion Greenwich Witches softball team! Janet was also a diehard NY Giants and Yankees fan. She attended many games over the years, hosted countless Super Bowl parties, and supported her teams through thick and thin. She was also very proud to be the oldest participant in a local NFL pool! When Janet was 49, she discovered her passion for running, which turned into many years of marathons (17!), half-marathons, 5Ks, 10Ks – you name it, she ran it! Been there, done that, got the t-shirt! Running was something she shared with her brother Leo, and they traveled together to many races. Her favorite marathon was the Maine Coast marathon. Janet also loved her pool and spent many summer afternoons swimming laps, usually after her runs. Above all, Janet was devoted to her family. They always came first, and she was the happiest when she was surrounded by her children, grandchildren, and great grandchildren. She overcame many health challenges with determination and grit. In addition to her parents, she was predeceased by her husband Clayton Aldous; her brothers Leo, Donald, and Edward Nash; her sons-in-law Allen Green and Jim Darling; and her grandson-in-law Edward (Brady) Waite. Survivors include 5 daughters: Regina (Ron) Snell of Easton, Theresa Aldous of Greenwich, Jennifer (Lenny) Sherwood of Maine, Katie Cosey and Ingrid (Kevin Tripp) Darling of Greenwich; 14 grandchildren, Brooke (Rich) Record, Rebecca (Matt Winch) Lambert, Bert Lambert, Briana (Justin) Coffin, Aldous Sherwood, Lenny (Brandi Harmon) Sherwood, Keegan (Matt Caul) Waite, James (Ciara Tabor) Perry, Greta (Matthew) Pisani, Sarah (Jake) Warren, Kaela Cosey, Brittany (Marciel) Ramirez, Nikea Green, Tashina (Cole) Roose; 1 sister, Helen Ackermann; 2 sisters-in-law, Susan (Michael) Hughes and Edna Nash; 11 great grandchildren, Viola and Wesley Coffin, Silas and Marissa Perkins, Brandon Pryor, Tristan Mattison, Anvil and Acious Roose, Carmine Armao, Rylie and Kylah Harmon; and several nieces and nephews, plus new furry addition Dutton. A mass of Christian burial will be held at 9am on Friday, June 17, 2022, at St. Joseph’s Church, 36 Bleeker St, Greenwich, NY 12834 with the Rev. Martin Fisher officiating. Burial will follow in the St. Joseph’s Cemetery. Family and friends are invited to a reception following Janet’s burial at the Greenwich VFW. Family and friends may call from 4-7 pm on Thursday, June 16, 2022, at Flynn Bros. Inc. Funeral Home, 80 Main St, Greenwich, NY 12834. Donations in Janet’s name may be made to St. Joseph’s Church, St. Jude’s Children’s Hospital, or the Comfort Food Community Food Pantry. The family would like to thank: Washington Center of Argyle, NY; Dr. Peter Gray; Dr. Paul Seegers; and the Greenwich First Responders for their dedicated care. Special thanks to Donna Jennings, Mic Hendrickson, John and Emma Westcott, and Cindy Waite for their kind support and friendship in recent years. Online condolences and messages to the family may be made at www.flynnbrosinc.com