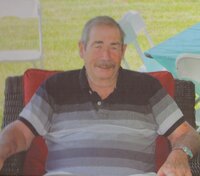 It is with great sadness that Bacon Hill has lost one of its lifelong residents, Thomas W. Barber Sr., at his home on West River Rd. surrounded by his family on October 25, 2022.

Tom was born June 5, 1943, the middle son to William and Frances Barber.  He graduated from Schuylerville Central High School in 1961 and was an active member of FFA and played football.  He furthered his education at SUNY Cobleskill, graduating in 1963 with a degree in Animal Husbandry.

He married his high school sweetheart, Starlet Bardin in 1964.  They built their home on West River Rd. and raised three children, Tom Jr., Trevor and Lisa.  As a young father, he was a member of Bacon Hill Reformed Church and in later years a member of the Bacon Hill Cemetery Assoc.  He was employed at Ciba-Geigy until its closing in 1989.  While there he taught new apprentices at BOCES to be future millwrights.  He also filled the position as board member of the credit union and later as president of that union.  When Ciba-Geigy closed, he assisted employees in transitioning to new positions in the area.

In 1984 he married Chick Thomas and became stepfather to Jennifer, Jared IV, Ruth Anne, Joshua, and Melissa Thomas.  In 1990, he accepted his brother Clint’s offer to work on the family farm.  These years were the best of his life, working each day side by side with Clint.  After Clint’s passing, Tom treasured the privilege of working with his nephew Chad.

Tom had many titles in his lifetime; Tom, Dad, Grampa, Bumpa, Mr. Tom, and Mr. Chick.  Many referred to him as “The Mayor” as he was always aware of the wants of the neighborhood, but especially the progress of the local farms, concern for neighbors and dear friends.

Tom was the best of the best, loved and respected by all who knew him.  He was a man of strong values, morals, and unimpeachable integrity.  Ever so humble, a kind and gentle spirit.  He never forced himself on others, however he was a magnet to those attuned to his loving attributes.  A model for his children, stepchildren, and grandchildren, hoping that by his example, they would do their best in making this world a better place.

Toms’ moral toughness is only exceeded by his physical toughness and stubbornness during his many medical setbacks through the years.  Each time, he surpassed all medical expectations and returned home to Chick and family.  Family functions, picnics, birthdays, holiday get-togethers, graduations, weddings, sporting events of grandchildren, and meeting new great grandchildren. It was such an honor to him to have the youth of the family and Springfield Football boys to visit him and share their young lives and hopes for their future.  He will be remembered and missed by many, his unconditional love, his wit and sense of humor, his laugh, and his kindness.

Tom was an avid Giants and Yankee fan and was always up for friendly banter with those with different choice of teams.  You always knew a deep and engaging conversation was coming when he saw you and said “I have a question for you”.  In recent years, Tom loved having visitors on the front porch.  He kept abreast of local farms as they passed by house and through the intersection. Tom’s greatest legacy will be the effect and influence of his love and wisdom to his family and extended family.

In addition to his parents, he is predeceased by his brother, Clint; his first wife, Starlet; and sister-in-law, Cathy.

A Celebration of his Life will be held at 3pm Friday, November 11, 2022 at the Bacon Hill Reformed Church, 560 Route 32N, Schuylerville, NY.

Special gratitude to those special people of Saratoga Community Hospice for their care and support to both Tom and Chick, and also to those who provided quality of life during his confinement at home, Bob, Larry, Harry, Linda, Julia and Brenda-with laughter and conversation.