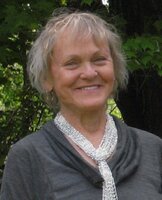 Marilyn J. Holmberg was born August 24, 1930 in Minneapolis, MN and passed away on November 18, 2022 in Saratoga Springs, NY. She is predeceased by her only daughter, Lisa Blitz, and survived by her sonin-law Brian Velenchenko. She moved to Los Angeles, CA the day after she graduated from high school, and shortly thereafter became an airline stewardess. She often described these years as the most exciting period of her life! She married and had a child, Lisa, and remained in California for many decades, later living on the Pacific Coast Highway. She loved to walk on the beach daily, and made many friends in the Huntington Beach area. She was an enthusiastic dancer and a fan of jazz standards and big-band music. She also loved gardening, and trying foods from different countries and cultures. Late in life she moved to New York to be with her daughter and son-in-law in Gansevoort. Her joyful spirit was infectious, and she will be greatly missed.