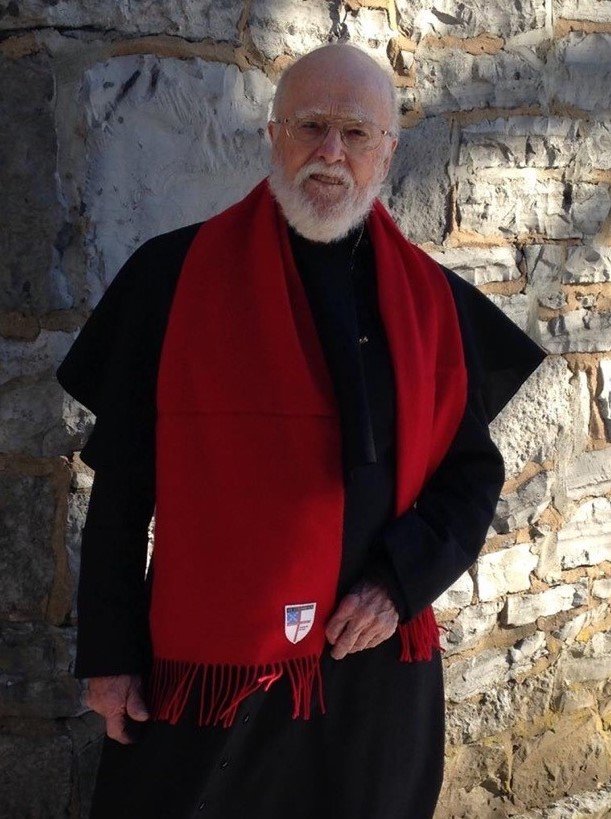 The Rev. John Kettlewell died peacefully at his home in Schuylerville on October 23. An Episcopal priest, lifelong educator, and lover of the outdoors, he maintained a zestful enthusiasm throughout his life for learning, adventure, and a good martini.

John Michael Kettlewell was born in Chicago, Illinois in 1930, the son of John and Audrey Kettlewell. Along with his twin brother James, he attended Harvard University, where he majored in English literature, enjoyed taking part in theatre, received an award for oratory, and developed strong ties with the Episcopal Order of St. John the Evangelist in Cambridge.

Following graduation from Harvard in 1952, he attended the General Theological Seminary in New York city, and was ordained as an Episcopal priest in 1955. He served as the assistant rector of Bethesda Church in Saratoga Springs from 1957-1960 and as the rector of St. Mark’s Episcopal Church in Geneva, Illinois, from 1960-1965, before joining the faculty of the Blue Ridge School, in St. George, Virginia, in 1965 as school chaplain and English teacher. During his time at Blue Ridge, he founded the outdoors program, turned in many memorable performances in plays and musicals, and served as a beloved mentor to generations of students, many of whom kept in touch with him long after graduation.

During his years in Virginia, he also earned an MA in English and counseling from the University of Virginia and served as rector at Grace Episcopal Church in nearby Stanardsville. Following his retirement from Blue Ridge School in 1991, he moved to Schuylerville, NY, where he served as the rector of St. Stephens Episcopal Church from 1991-2016 and as a head teacher for the Adirondack School of Northeastern New York from 1996-2013.

John will be remembered for his deep love of the outdoors, which he shared with his students, family, and friends. He was at his happiest hiking in the woods, climbing a cliff, sailing a boat, exploring an underground cavern, paddling his kayak on the Hudson, or sleeping in a tent. Despite any evidence to the contrary, he continued to believe he was still a teenager until well into his ninth decade, retaining a teenager’s delight in high adventure—if an escapade didn’t end in near-disaster, well where was the fun in that?  When he otherwise wasn’t under the care of a phalanx of guardian angels, he loved books and art and the pursuit of knowledge on a broad range of topics, and he was always ready to assure you that he had read the latest research.

Friends may call from 5-7pm on Friday at the church for an open viewing.

Memorials can be made in his memory to St. Stephen’s Church.

Share Your Memory of
Rev. John
Upload Your Memory View All Memories
Be the first to upload a memory!
Share A Memory
Plant a Tree