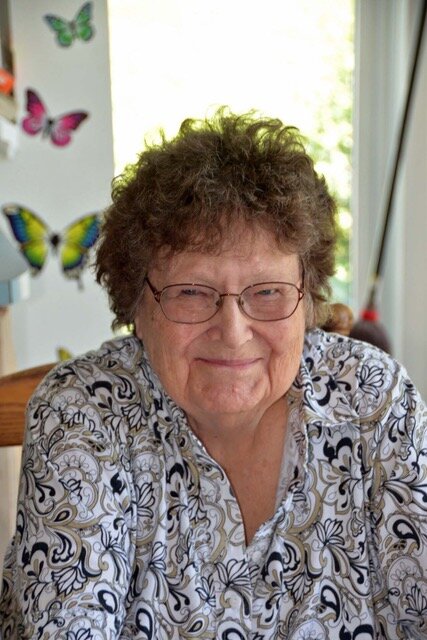 Rosemary Hoover Beavers was born May 9, 1927, in Charleston, West Virginia and passed away on Friday, August 19, 2022, at her home in Easton.

She was the daughter of the late Wendell W. Hoover and Nelle Amelia Chambers Hoover of Webster Springs, WV. In 1948 she married Thurman B. Beavers. They were married for 61 years until Thurman’s death in 2009.

Rosemary is also predeceased by a brother Wendell Hoover Jr. She is survived by her sisters, Julia Hoover, and Jane Parkinson. She is also survived by her three sons, Wendell (Erika), Mark (Laurel), John (Maribel), three grandsons, Kai, Mark, and John as well as many nieces and nephews.

After graduating from West Virginia University in 1948, Rosemary taught high school English and music in Frankford, WV, while Thurman taught science and math.  In 1951 the family – now including son Wendell – moved to Boston, MA where Thurman would attend Divinity School at Boston University. Rosemary worked as a high-level executive secretary for Armand Hammer in Boston during these years.

In 1955, the family, now including son Mark, moved to Johnsonville, NY where Thurman and Rosemary began a joyful, arduous life of service together as Pastor and Organist-Music Director of Christ Methodist Church. The Johnsonville appointment included serving many surrounding parishes including, South Cambridge, Eagle Bridge, Buskirk and North Hoosick.

Their partnership in community building continued for more than 50 yrs., with Rosemary applying her many talents to the role of pianist/organist, music director, church secretary, administrative assistant, and coordinator of many events including church suppers and many types of social services.

The family, now including son John, moved to Broadalbin, NY in 1963. Over the next three decades Thurman and Rosemary served the United Methodist Churches in Amsterdam, Canajoharie and East Stone Arabia, NY, Barre, VT, Centerville, NJ, Nassau and Glens Falls, NY. On this journey, Rosemary held a series of jobs to support the family. This was in addition to always providing administrative support to Thurman, often beginning and nurturing church choirs wherever they went, and being a loving mentoring mother to their three sons. Rosemary taught music in the Amsterdam public schools for several years, was a copy layout artist at the Penny Saver, and was an executive secretary at Litton Microwave and a financial aid officer at a business school in Albany.

In her “spare time” Rosemary became a painter, quilter, played the piano at home (Beethoven, Brahms and Chopin were her favorites), became a devoted METS fan on the first day the franchise was created, often listening to games while simultaneously listening to the opera broadcasts from the MET in New York. She was a voracious reader of mysteries, historical novels and histories, classic literature (Jane Austen was a particular favorite) – and poetry. She not only could recite poems she learned long ago but until very recently devoted time to learning and re-learning poems. For many years she was a determined solver of the New York Times crossword puzzles. In later years she began each day with a few Sudoku puzzles – “just to get my mind working.”

She will be deeply missed by her sons and daughters-in-law, sisters, grandchildren and many nieces and nephews who always looked to her for an uplifting, realistic, often humorous, wry view of life and our times.

Graveside services will be held at 1 pm on Sunday, August 28, 2022, in the Easton Rural Cemetery, Easton, NY, with the Rev. Virginia Cornell officiating.  Family and friends are invited to a reception at the family home following services.