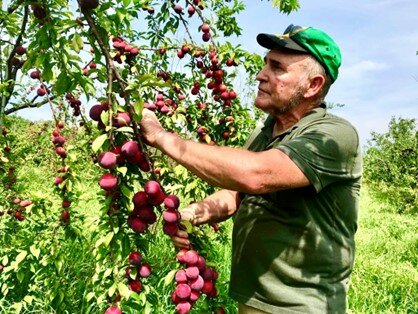 Obituary of Nathan B. Darrow

Nathan B. Darrow, apple grower and owner-operator of Saratoga Apple orchard and farmstand in Schuylerville, New York, died on September 20, 2022 at age 71. Nate was born in Brattleboro, Vermont in 1951, the son of William H. Darrow Jr. and Idolene (Hegemann) Darrow.

Nate grew up in Putney, Vermont at Green Mountain Orchards, the apple orchard planted by his grandfather and operated by his parents. He attended Putney Central School followed by the Putney School, graduating in 1968. In 1972 Nate graduated from Harvard College. He skied on the downhill racing teams at the Putney School and Harvard. After college Nate returned to Putney and worked with his father for a decade at Green Mountain Orchards. During that time he and his father formed associations with European apple growers, studying their cultivation methods. They visited European growers, and those growers visited Green Mountain Orchards. While in discussions with European apple growers Nate became fluent in French.

In the summer of 1980, Marie-Christine Gaud from France visited Green Mountain Orchards while traveling in America with a sister. Nate and Marie Christine married in 1983.

In 1982 Nate took a job planting and managing Granny Smith Associates, the largest Granny Smith apple orchard on the East Coast, in Laurens, South Carolina. In Laurens he and Marie Christine had five children: Carl, Sonia, Emily, Elsa, and Eric. Carl died in 1986 in Laurens. In 1994, Nate and Marie-Christine purchased an apple orchard in Schuylerville, New York and named it Saratoga Apple. Through Saratoga Apple, Nate shared his passion for apples and became a fixture of the agricultural and farm-to-table communities. The Saratoga Apple family includes local employees, community members, and the Jamaican harvest crew headed for 20 years by the late Joseph Garricks. Saratoga Apple grew into a beloved destination for cider, donuts, & apple picking as well as music, culture, and local gatherings. In 2012 Nate’s son Eric joined his father in running the orchard, launching a tap room and line of hard ciders.

Nate is mourned by his wife Marie-Christine, his children Sonia, Emily, Elsa, and Eric, six grandchildren, and four brothers.

Share Your Memory of
Nathan
Upload Your Memory View All Memories
Be the first to upload a memory!
Share A Memory
Plant a Tree