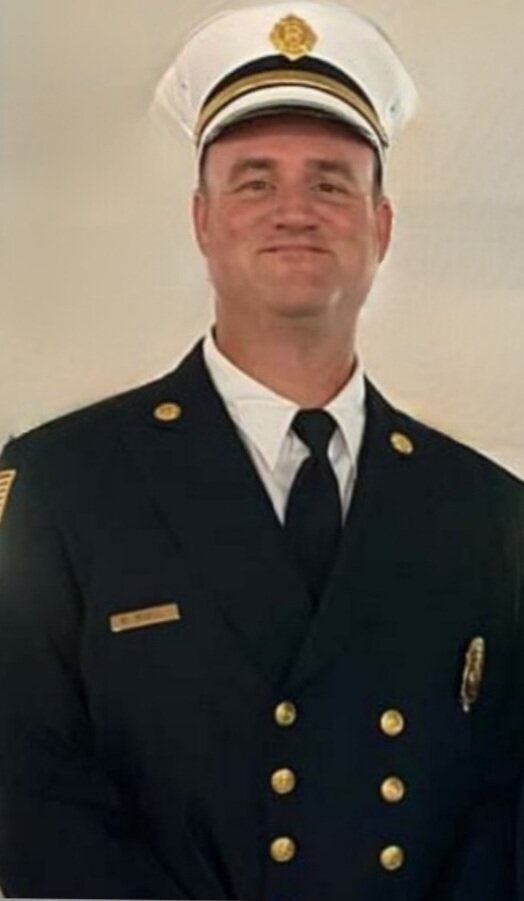 Brian lived and breathed firefighting, it was his passion.   This became evident as a young child, as he loved the television show “Emergency!”.  He joined the Greenwich Fire Department Explorer program at 14, where he began his service to his community and would eventually become the youngest Lifetime Member of the department.  He worked his way up through the ranks and was currently Deputy Chief.  He also was a New York State Fire Instructor.  He would do anything for anyone who needed assistance.

The fireman’s creed was truly part of his soul, “When I am called to duty, God wherever flames may rage, give me strength to save a life, whatever be its age.  Help me to embrace a little child before it’s too late or save an older person from the horror of that fate”.  Brian always answered the call to serve, and he will be missed by many.

When he wasn’t at the firehouse, which was rare, he enjoyed his family, sitting on the porch of “2-9”, just spending time with friends, and taking random brewery tours with his wife and friends.

He was predeceased by his two infant sons, Dominick Warren Buell and Kain Gregory Buell.

In addition to his parents, he is survived by his beloved, loving wife, Carrie (Brown) Buell; his children, Ryan (Morgan) Buell of Rensselaer, Stephen Buell of Greenwich, Rachel Witham of South Glens Falls and Bailey Buell of Queensbury; bonus children Jayden Hughes and Chase Goldson; 3 grandchildren Tucker and Maverick Buell and Layne Buell; his brother Daniel (Corrina “Edna”) Buell; 2 aunts, several cousins and his brothers and sisters of the Greenwich Fire Department.

A Funeral Mass will be held at 11am Monday, June 27, 2022 at St. Joseph’s Church, Greenwich, NY.  Burial will follow in the Greenwich Cemetery.

In lieu of flowers, donations in his name may be made to the Greenwich Fire Department.

Share Your Memory of
Brian
Upload Your Memory View All Memories
Be the first to upload a memory!
Share A Memory
Plant a Tree